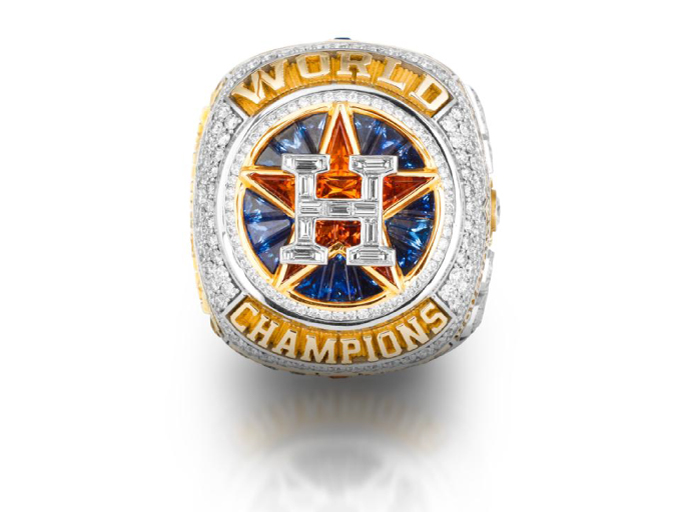 The Astros unveiled their Championship rings against the Orioles today. The rings are a beautiful sight, and many fans can’t wait to get their hands on one this Saturday, April 7th. This is where fans can get a nice replica model of the rings for free! It’s limited to the first 10,000 fans so you better get there early, many will be waiting.

As far as the real rings that were introduced today, they shine with the words “WORLD CHAMPIONS” With the H in the middle and the Star behind it. They are a beautiful sight and have very nice design specifications that will make a jeweler go wild.

According to the Houston Astros, the ring flaunts:

That’s a beefy spec list and will surely shine when any light hits it. Certain special designs on it such as the “H” have 11 baguettes which represent the 11 wins it took to get this ring- a nice touch and surely one no one will forget. The top of the ring also has 101 diamonds around it to account for all the regular season wins in the 2017 season. There are also 56 years around the Astros logo whi

ch represents the 56 years of the Astros franchise.

On one side of the ring, we can see the players name and the city of Houston on the side. There is also a number representing the player and it is encrusted with diamonds as well. On the other side, it shows the 2017 year as this was the year the ring was won in. The words “HOUSTON STRONG” are written on the side and the trophy sits right in the middle.

Finally, on the inside we see the results of every Astros playoff series etched right in the middle of the inside ring. “EARNED HISTORY” is also displayed on there, which allows the players to know what their motto was for the postseason.

These rings are truly spectacular and beautiful to look at. Don’t forget to head to Saturday’s

game if you do want a shot to get your own replica!