Whether you are a fan of Lyle Lovett or his large band (or both), if you have not had the opportunity to see this consummate Texas performer live, then you need to grab your tickets and head out to the Smart Financial Center this Wednesday.  They are coming Wednesday, August 14th, and the performance, set in this smaller arena setting, is guaranteed to offer a great musical performance.

What makes Lyle Lovett such a thrill to see in a live performance?  A huge part of it is his musicality.  Sure, Lovett is a great lyricist and his unique voice puts a twist on songs that other artists would struggle to find, but what really makes him stand apart as a musician is that he seems enamored with what every instrument brings to a song, and he just wants to share that with his audience.

Another thing is that Lovett is just so personable.  Though he is a bonafide star, not just of the musical world, but also featured in several films, he still appreciates his fans.  Not only does he stop for the expected handshakes and meet-and-greets, but he actually takes the time to remember fans he sees again each year.

So, if you are free on Wednesday, do yourself a favor and make plans to go see this Texas original. 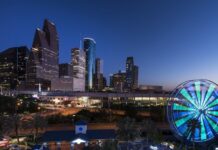 25 Best Things to Do in Houston