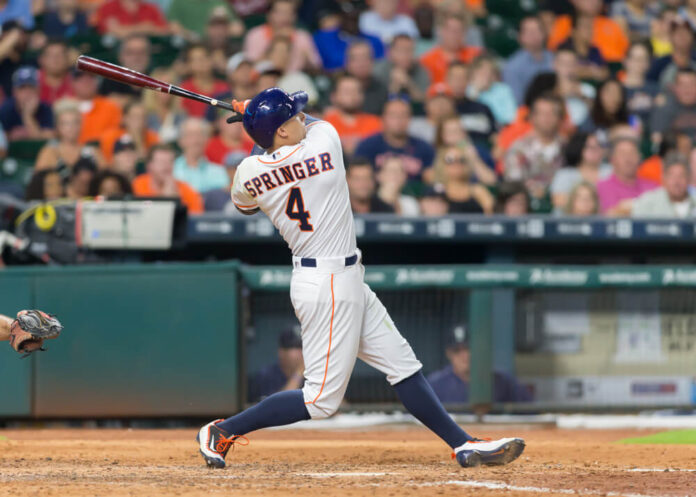 The Astros just repeated a weird thing from last year’s opening day. George Springer, the Astros leadoff hitter, hit a bomb on the 3rd pitch today. Last year, Springer hit it on the 4th pitch. The Astros have won a world series off a Springer opener leadoff home run, which was last year. The Astros already seemed primed to win this season as they defeated the Rangers 4-1. The Astros look to repeat season success as they did last year going all the way to the World Series and winning It all. So far, it’s going just like last year, which could ultimately lead us to another World Series.

Beating the Rangers, the Astros put up some impressive numbers from their hitting team. They scored a total of 4 runs today, thanks to a home run from Springer and Marisnick. Altuve hit a sacrifice fly in the third to let McCann score, while Correa doubled in the 8th to allow Altuve into home plate. The Astros pitching rotation was solid today besides the Ken Giles wild pitch in the 9th inning which allowed the Rangers to score their only run of the game and prevented the Astros from shutting out the Rangers at their stadium in the home opener. Verlander pitched 6 innings today and allowed 4 hits with 5 strikes. Devenski and Peacock also pitched a single inning each and allowed 0 hits, while Giles closed out the game with 1 inning pitched and allowed 2 hits. The Astros have started off on a decent hitting outing but did not impress in batting average, but the home run power is there. It’s only 1 game to base anything off of, so with more games in the coming weeks, we will see how the Astros respond after Spring Training.

The Astros play the Rangers again on the 30th at 7:05 PM. They are still going to be away until April 2nd against the Orioles. Their home opener will sure be a good one, and the defending champs will unveil their banner here as well. For all Astros related news, make sure to stay at ItsAHoustonThingNews.com.